How to use webbing slings and round slings to restrain loads?

Webbing slings and round slings are used to safely lift goods and cargo and can be told apart by their appearance: webbing slings are flat, whereas round slings are tubular. Both are indispensable when it comes to lifting loads, but they can also be very useful tools when restraining heavy loads. The question is, though, how can you use slings safely? What do you have to keep in mind and what is the maximum work load limit of a round sling when used to restrain a load? Our load securing specialist Niels Bouwmeester provides answers to these questions in his new blog.

WHAT ARE WEBBING SLINGS AND ROUND SLINGS?

As indicated, webbing slings and round slings can be used to lift and restrain loads. The difference between flat webbing slings and round slings is that the latter look like tubular loops. Polyester slings have many advantages over their metal alternatives, such as chains. They weigh less and take up less space, for instance, as well as being easier to maintain and inspect, less dangerous to use, corrosion-resistant and considerably cheaper. Keep in mind that you should always use high-quality, certified polyester round slings that are suitable for professional use.

The Machinery Directive 2006/42/EC lays down the requirements that all lifting equipment in Europe must comply with, such as that all lifting equipment must have CE marking. This well-known logo indicates that the product complies with European rules and regulations. Webbing slings must comply with the NEN-EN1492-1:2000 + A1:2008 standard, whereas round slings have to comply with the DIN EN 1492-2:2000 + A1:2008 standard.

You can tell the work load limit of a particular webbing sling or round sling by looking at its colour. This colour-coding system is used worldwide, but it is important to remember that it is not used on all slings. That’s why it’s always important to check the WLL (Work Load Limit) specified on the label, which always takes precedence over the colour of the sling. The colour of the label also indicates the material the sling consists of, with Polyamide (PA) slings featuring a green label, Polyester (PES) slings featuring a blue label and Polypropylene (PP) slings featuring a brown label. ROUND SLINGS AS ARTIFICIAL ANCHOR POINTS

Round slings are used to hold loads in place in the absence of lashing rings. When lashing loads in the direction of travel, round slings can be tied around the load and fixed in place with lashing straps. There is little information available about restraining loads with round slings, which is why I’ll explain how it works in greater detail below. 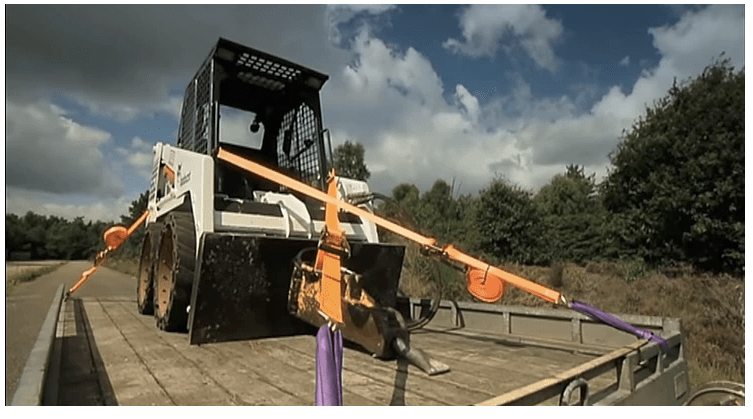 MAXIMUM LOADS FOR ROUND SLINGS

Nowadays, the lashing capacity of a round sling used as a lashing eye or spring lashing can be equal to the specified WLL, which makes the work a lot more convenient. In other words: the maximum LC is equal to the sling’s WLL, while the WLL may not be lower than LC. For an LC of 2500 daN, for instance, one should use a sling rated at 3 tonnes. The sling will not be overloaded and will remain suitable for lifting loads.

Make sure to always use a suitable hook, i.e. a hook that fits snugly and properly. Using undersized hooks will result in a poor fit, which may cause the internal fibres of the sling to be pinched. It is important to remember that putting too much stress on polyester slings will always reduce their maximum breaking strength.

RESTRAINING LOADS WITH ROUND SLINGS

There are countless ways to restrain loads with a round sling. Below, I have listed some of the main ways to restrain odd-sized loads. In any case, make sure to protect sharp corners with appropriate protective equipment and avoid using non-slip materials.

As we mentioned above, round slings can be used as lashing eyes. You can attach the round sling to the vehicle or to the load to be secured.

ROUND SLINGS USED AS ANCHOR POINTS

To restrain loads that are difficult to secure, you can use round slings to create artificial anchor points by fastening the sling around the load as a choker. Bear in mind that this method will decrease the original WLL of the sling by 0.8.

Webbing slings and round slings that have been damaged in one of the following ways may not be used to restrain loads:

Tests show that when a polyester sling is damaged, its breaking strength is drastically reduced. That’s why you should only use sound equipment that can withstand the relevant loads. When using the solutions mentioned in this article, make sure to eliminate all weak links.

In some cases, specialist training in securing loads may be required. Want to find out more about cargo securing? Take a look at our cargo securing page for solutions and products and check cargo coaching for specialist training on cargo securing. Naturally, you can also contact me directly on +31 (0)6 – 53 32 95 23

Can you use the gooseneck as an aid for securing loads?